One of my fellow cohort-mates sent out a Facebook plea the other day asking for topic suggestions to elicit lots of language from a client during her upcoming eval session.  Based on his file, he was 13 yrs old, coming in for a voice/artic eval (I know…odd combo), and his interests ranged from “I dunno” to “whatever.”  To all you male SLPs out there (yes, all 8 of you), maybe you have a secret arsenal of conversation topics to get boys in this age range spouting off language.  For the rest of us though, this is a dreaded demographic for eliciting lots of connected speech for later analysis.  My friend’s post was met with a myriad of responses…some truly helpful and others downright hilarious! 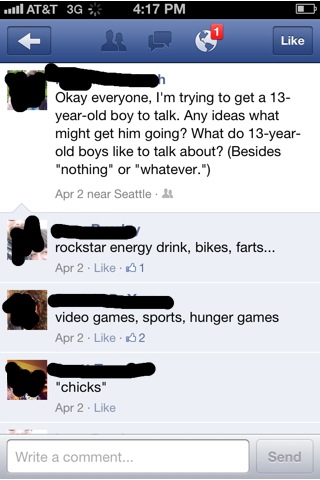 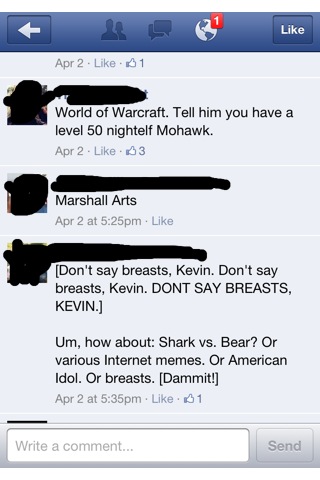 Although she generated a handful of decent suggestions from the wonderful world of social networking, we all tossed out some ideas later that day in our computer lab.  I thought I would share some of the good ones from that conversation in case you are ever stuck trying to think of fun ways to elicit lots of language from a client this age!

Hanna Bogen, M.S., CCC-SLP is a Speech-Language Pathologist and Social-Cognitive Specialist based in Los Angeles, CA. Hanna spent three years as a therapist with Communication Works in Oakland, CA, gaining expertise in social-regulation. With a primary focus on therapies and interventions that support self-regulation and social communication, Hanna consults and collaborates in multiple schools to bring social-regulation, executive functioning, mindfulness, and social-cognitive strategies into the classrooms. She has trained K-12 teachers and educational specialists in California, Washington, and Oregon to support them in meeting the needs of all learners in their classrooms. In addition to her school consultation, Hanna provides individual and group therapy in the areas of articulation, language development, self-regulation, executive functioning, and social communication.

Hanna is the co-creator of the Brain Talk curriculum (www.braintalktherapy.com), which teaches students about brain functioning to improve metacognition and self-regulation skills.

Included in the Best 100 Sites for Speech Pathologists