In honor of the fact that Super Duper is marking all their apps down to only $1.99 between May 1st and May 7th for Better Speech and Hearing Month, I wanted to post a review of 2 of their apps that I think are great!  All of the apps in this family give you the ability to keep data or correct/incorrect responses.  Additionally, they are customizable and allow you to choose which flash cards you want for each client and which you want to leave out or save for later (isn’t customization the best?!?!).

This app reminds me of a spin-off of part of the TNL (Test of Narrative Language): where the child must generate a narrative based on what’s happening in the picture.  In this case, the child is expected to generate language about what they think is being said by the character(s) on the card.  Although this might seem like a limited task, there are a huge number of possibilities for language skills you can target with an app like this!  Below are some of my ideas: 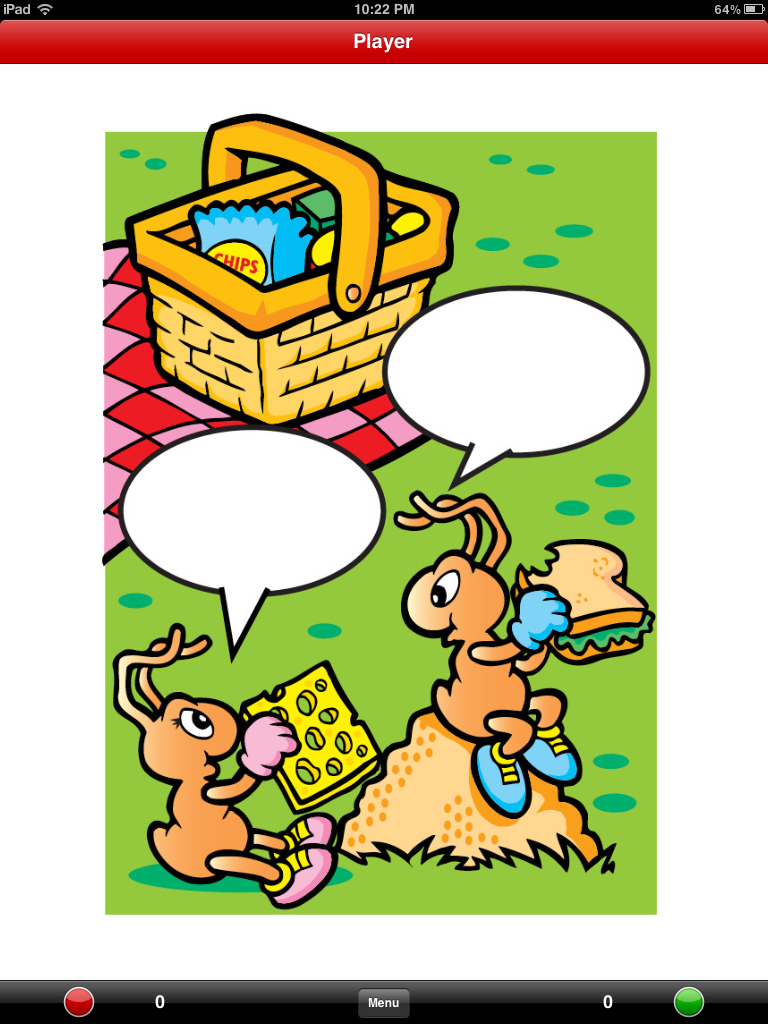 Rather than just asking the client to fill in the thought bubbles, ask them to tell you a story about what happened/is happening/and will happen based around what they see on the card.  They can still incorporate the task of filling in the conversation bubbles, but you also will get all kinds of information about the syntactic organization of their sentences and paragraphs, their use of transitions, the relevance of their ideas, their descriptive vocabulary, and their lexical variety!  With a simple card like the ant/picnic one above, you might even cue the child with the beginning of the story: “I’m going to start a story about this card.  I’ll tell the beginning, and then I want you to tell me the rest!  Ready? A man and a woman went for a picnic on a hot, sunny day.  They decided to go for a walk before lunch, but left all their food on the blanket while they were gone.  In the meantime, 2 ants came across the blanket and picnic basket.  Can you finish this story?”  You can always ask the client what they think the ants are saying to each other if they forget to fill in the bubbles!  Language, language, language! 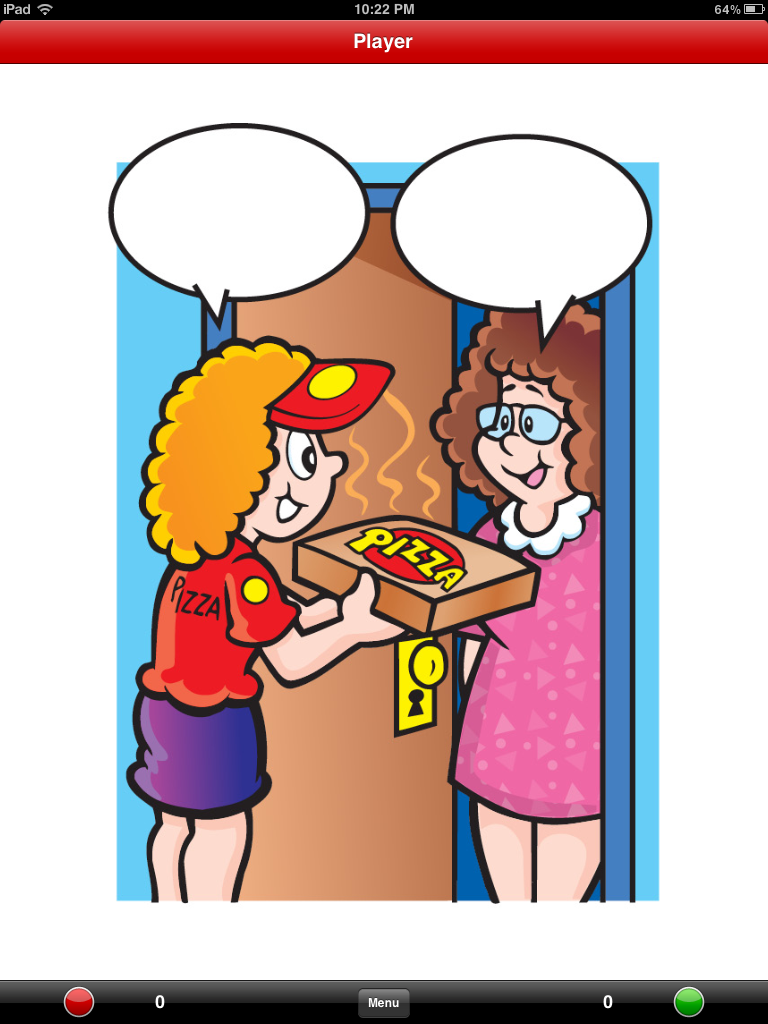 Use this deck as a quick criterion-referenced activity to look at mental flexibility (part of a child’s developing executive function skills).  With a card like the one above, you can begin by asking the client to tell you what each character is likely saying.  THEN, throw a wrench in the scene by explaining that their initial conclusion may not be accurate (for example, the lady inside the house is actually telling the pizza delivery lady that she didn’t order a pizza at all).  See if your client can readjust his or her thinking quickly in order to change the conversation components of the card to match your new scenario!

This app was designed to help clients practice their understanding and expression of what is likely to happen next.  Prediction is a critical skill for general language development (we do this all the time during conversations with other people), but it’s also extremely important for academic success.  The ability to predict is linked to one’s ability to make inferences, as both require the child to “read” the scene and make assumptions about abstract actions that may or may not take place. 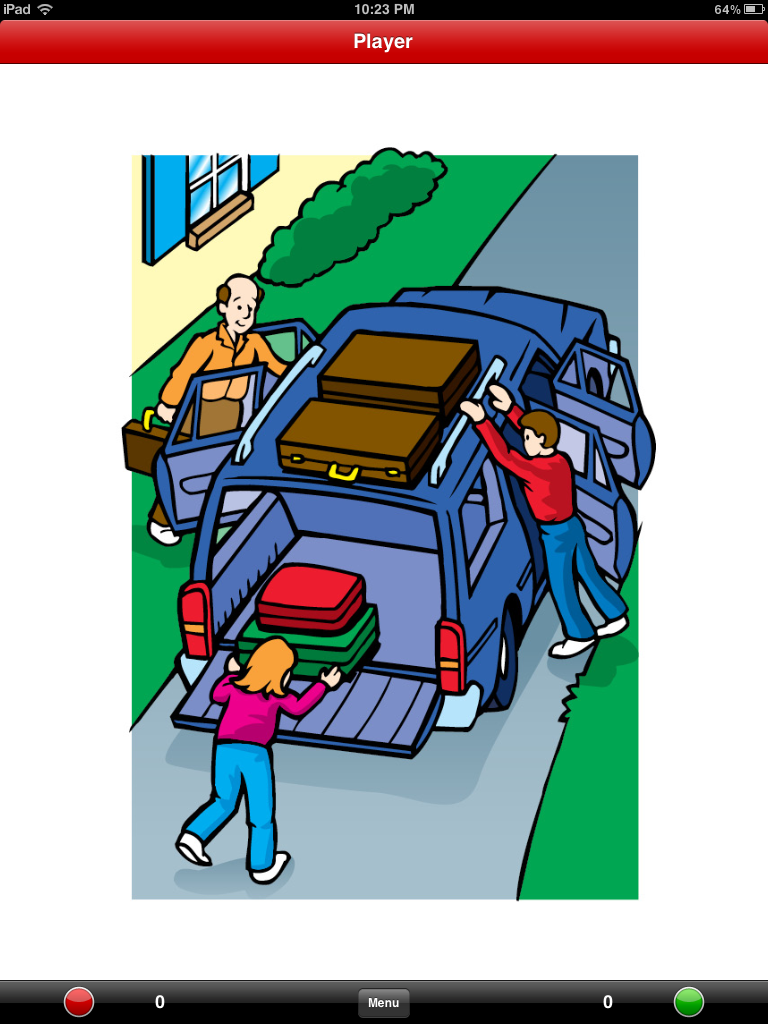 In addition to simply asking the child to predict what’s likely to happen next based on what they see on the card, try asking him/her to tell you what they think happened right before this AND what they think will happen next.  Synthesizing a single scene into a more cohesive “story” will help your client in all kinds of classroom tasks that similarly require synthesis of information across activities/classes/topics!  Encourage the client to look for clues in the scene to help them figure out what happened before the scene and what’s likely to happen next. 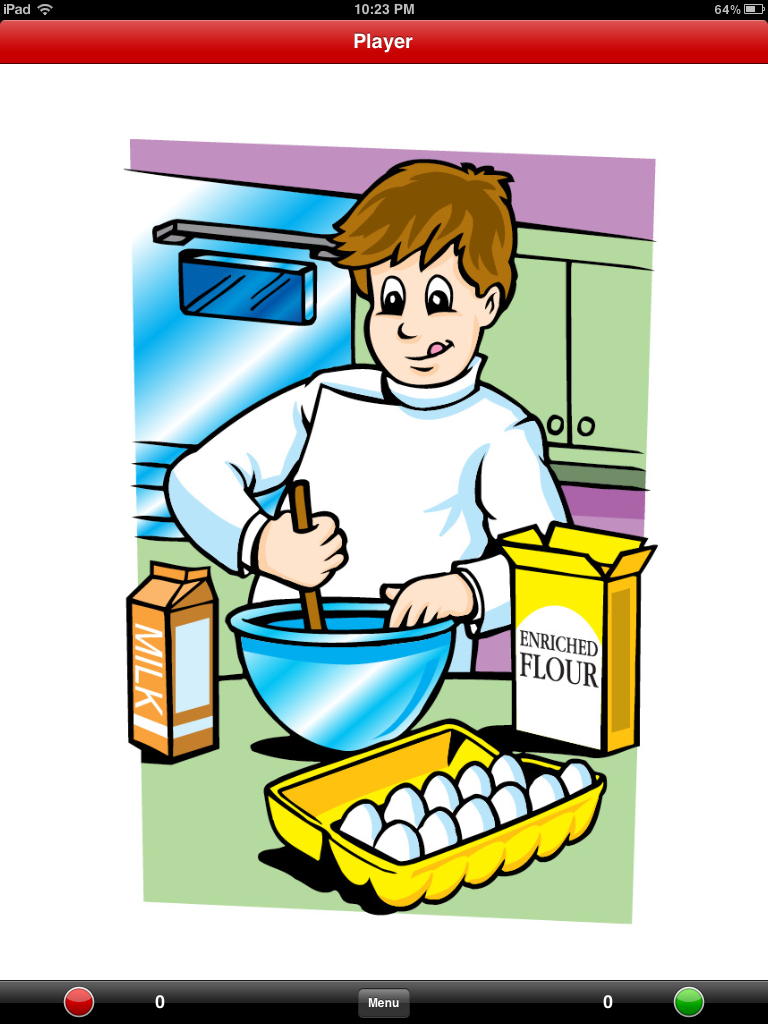 YOU (as the clinician) can be the one making the predictions!  BUT instead of making accurate predictions, create silly ones that don’t make total sense based on the clues in the picture.  The client’s task is to tell you why your prediction is unlikely to take place and to correct it into an accurate prediction! For example, if you were using the card above, you might tell the child that you predict the man is going to grill some chicken.  Their job is to consider the clues (eggs, milk, flour) and (hopefully) correct your prediction to one that makes more sense: the man is going to bake cookies! 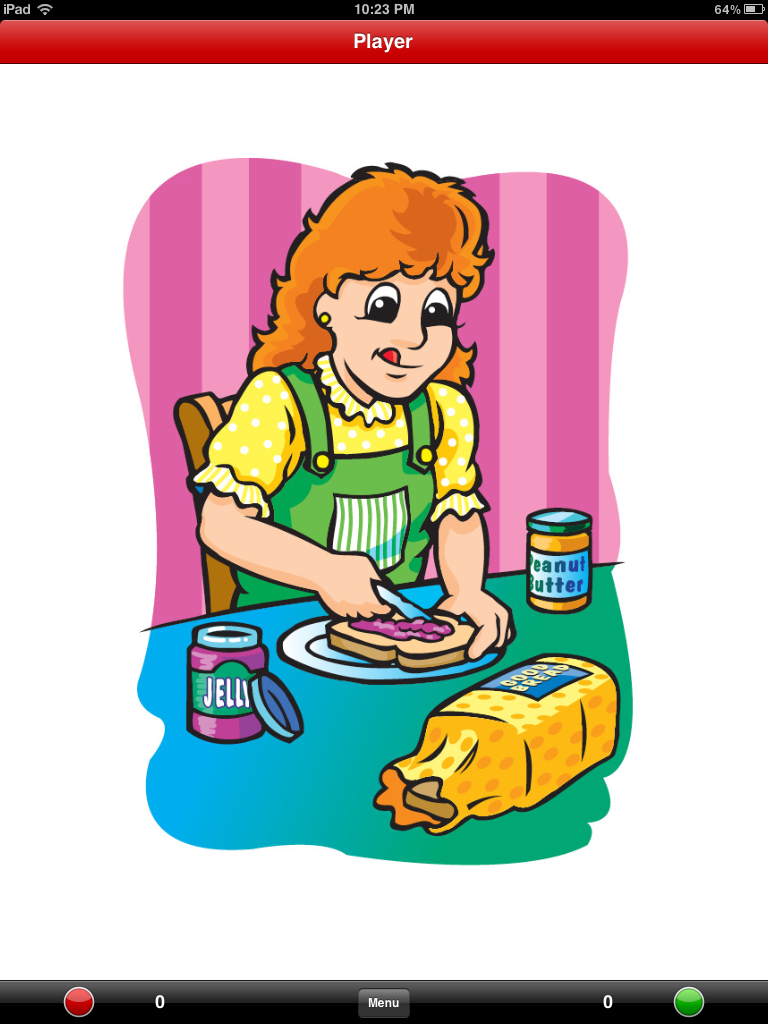 Double up on the functionality of this app and use it for verb awareness!  Focus on what the character(s) is/are doing in each picture!  Shoot for less common verbs (e.g. “spreading jelly” rather than “making a sandwich”).

I hope these ideas make your next therapy session with your Super Duper apps THAT MUCH BETTER!!!

Hanna Bogen, M.S., CCC-SLP is a Speech-Language Pathologist and Social-Cognitive Specialist. With a primary focus on therapies and interventions that support self-regulation and social communication, Hanna consults and collaborates in multiple schools to bring social-regulation, executive functioning, mindfulness, and social-cognitive strategies into the classrooms. She has trained K-12 teachers and educational specialists across the U.S. to support them in meeting the needs of all learners in their classrooms. In addition to her school consultation, Hanna provides individual and group therapy in the areas of articulation, language development, self-regulation, executive functioning, and social communication. Hanna is the co-owner of Executive Functioning Junction and the co-developer of the Brain Talk curriculum, which teaches students about brain functioning to improve metacognition and self-regulation skills. She holds a B.A. from Linfield College and a M.S. from the University of Washington. View all posts by hbslp

Hanna Bogen, M.S., CCC-SLP is a Speech-Language Pathologist and Social-Cognitive Specialist based in Los Angeles, CA. Hanna spent three years as a therapist with Communication Works in Oakland, CA, gaining expertise in social-regulation. With a primary focus on therapies and interventions that support self-regulation and social communication, Hanna consults and collaborates in multiple schools to bring social-regulation, executive functioning, mindfulness, and social-cognitive strategies into the classrooms. She has trained K-12 teachers and educational specialists in California, Washington, and Oregon to support them in meeting the needs of all learners in their classrooms. In addition to her school consultation, Hanna provides individual and group therapy in the areas of articulation, language development, self-regulation, executive functioning, and social communication.

Hanna is the co-creator of the Brain Talk curriculum (www.braintalktherapy.com), which teaches students about brain functioning to improve metacognition and self-regulation skills.

Included in the Best 100 Sites for Speech Pathologists